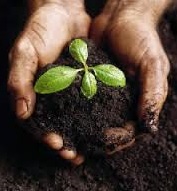 Today, topsoil is being lost at a rapidly increasing rate due to poor agricultural practices and/or the affects of drought.  Also, some regions are naturally sandy or gravely. As a result of either or both of those factors, very few of us own property with soil that contains much, if any, organic material. Soil that lacks organic content is essentially dead. And dead soil does little to help you grow the fruits, nuts and vegetables that are needed to live a healthy sustainable lifestyle. So, in order to produce healthy crops that in turn help make us healthy people, we need soil that has organic content, which is otherwise known as topsoil.

Topsoil is the foundation for plant growth because it provides an environment for plants to access some of the key components to life and growth, which are water and nutrients. While the topsoil itself will contain nutrients, given that it has organic material as part of its makeup, the more important factor is the environment that the topsoil provides for beneficial bacteria, fungi and other microorganisms to colonize and flourish. These unseen communities found in healthy soil act to breakdown organic matter into nutrients that are easily available to plants and even act as a highway network for helping to transport nutrients and moisture through the soil to the roots where the plant can absorb them. In addition, a well structured topsoil has a loose granular texture, which retains some moisture, but allows excess water to drain through, preventing the growth of unhealthy mold and the potential for plant  roots to rot from sitting in pools of water. While excess water drains through a well structured topsoil, the organic content and microorganisms capture most of the nutrients passing through the soil, storing them for later use. Given all of these factors, topsoil is critical to the long term ability to grow healthy plants for sustained food production.

One of the most efficient and effective methods of producing topsoil is by adding it on top of the ground in a steady consistent manner over time. This avoids tilling material into the surface of the existing soil, since tilling destroys the soil structure and the existing microorganism communities that might have already taken up residence. By adding the topsoil slowly, plant roots and microorganisms have the opportunity to grow into the new layer of topsoil, instead of being buried below an avalanche-like deep layer of new material all at once. Plus, you will not always have the luxury of calling up to order a dump truck load of topsoil. So, the answer is to create topsoil yourself. You can do this by creating deep layers of woodchip mulch placed over the existing soil. Where the mulch comes into contact with the soil, the microorganisms, moisture and temperature work in harmony to decompose the organic content of the mulch into natural topsoil. In addition to woodchips, you can supplement your mulch with leaves and composted materials, such as kitchen scraps and livestock manure. Start with a minimum mulch depth of 6” and add more material each year to maintain this minimum thickness. This minimum mulch depth helps to maintain the moisture and temperature required for the mulch to decompose into topsoil at the fastest rate possible. Deep mulch also helps to hold moisture, which reduces the need for frequent watering, and it cuts down on the growth of weeds. Mulch acts similar to a sponge, in that it can hold a large amount of water and make it available to the plants as they need it. A well maintained mulch layer can reduce your watering needs by more than 50% over garden areas without mulch. Not only does this save valuable time and effort, but it can significantly reduce the amount of water used, which can be an important factor for those who have limited water resources.

There is a common myth that using woodchips and/or needles from coniferous trees, such as pine, will change the soil acidity (pH) so that it becomes overly acidic. While it is true that the live green material taken from coniferous trees and shrubs are slightly acidic, recent testing and real world experience has shown that adding this woody material as a mulch layer on the surface of the ground that is allowed to slowly decompose into the soil produces insignificant pH change. Creating only a slight change in soil pH will not have a practical impact on plant health, unless the plant in question is already in poor health or the existing soil is already overly acidic. The primary issue with soil pH has to do with the ability for plants to absorb nutrients. Each type of plant prefers a slightly different soil pH for optimal nutrient uptake. So, in an ideal world, each plant would have its own area of soil that is optimized for its particular liking. Even if this monoculture approach were advisable, which it is not due to issues such as disease and depletion of nutrients, it would be a nightmare to amend, monitor and continually adjust the soil conditions for each plant area. A common sense approach is to provide topsoil for your plants that has a balanced pH and is loaded with nutrients. That way you can grow just about any type of plant in an environment where it will thrive.

A few simple rules to remember with your woodchip mulch is to slope the mulch down to ground level at the trunk or stem of your plants in order to prevent damage due to rot caused by the moisture in the mulch. Another rule is to avoid mixing the woodchips into the soil, as this will cause nitrogen in the soil to be actively engaged in decomposing the woody material, making it unavailable to the plants. The final rule is to avoid using material from trees that have strong allelopathic chemical properties, such as Black Walnut and Sumac. The bio-chemicals found in these types of plants act as a toxin to many other species of plants, making it difficult for them to grow and/or reproduce.

Given the fragile nature of our just-in-time grocery store inventory systems and easily disrupted food production methods, being able to sustain yourself by growing nutritious food on your own property could become crucial. So start improving the health of your land now by building topsoil as the foundation of your future self-sufficient food production system.

Helping you achieve a life of liberty.